In the spirit of IDEs, Sublime Text suggests completions that aggregate code or content while writing by catching everything that you have written, like variable names.

There are however several ways to extend the list of completions (for example, depending on the current syntax).

This topic deals with how completions are used and where they come from.

# How to Use Completions

There are two methods for using completions. Even though, when screening them, the priority given to completions always stays the same, the two methods produce different results.

Completions can be inserted in two ways:

When the list of completion candidates can be narrowed down to one unambiguous choice given the current prefix, this one completion will be validated automatically the moment you trigger the completion list. 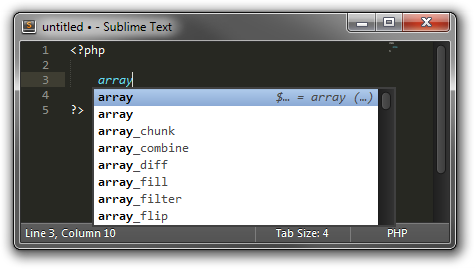 Completions not sourced from the text in the current file may provide a trigger that is different to the content they will insert if selected. This is commonly used for function completions where the content also includes the function's signature.

For example, completing array_map from the PHP completions will result in array_map({callback}, {arr1}):

You may notice in the animation that the cursor automatically selected callback. This is because completions support the same features as snippets with fields and placeholders. For more details, refer to Snippet Features.

Sublime Text can also handle completions with multiple cursors but will only open the completion list when all cursors share the same text between the current cursor positions and the last word separator character (e.g. . or a line break).

If you want to be able to tab-complete completions, the setting tab_completion must be set to true (default). Snippet tab-completion is unaffected by this setting: They will always be completed according to their tab trigger.

With tab_completion enabled, completion of items is always automatic. This means, unlike the case of the completions list, that Sublime Text will always make the decision for you. The rules for selecting the best completion are the same as described above, but in case of ambiguity, Sublime Text will insert the item it deems most suitable. You can press the ⭾ key multiple times to walk through other available options.

When tab_completion is enabled, you can press ⇧ ⭾ to insert a literal tab character.

# Sources for Completions and their Priorities

These are the sources for completions the user can control, in the order they are prioritized:

Additionally, the following completions are folded into the final list:

Snippets will always win when the current prefix matches their tab trigger exactly. For the rest of the completion sources, a fuzzy match is performed. Furthermore, snippets always lose in a fuzzy match.

When a list of completions is shown, snippets will still be listed alongside the other items, even if the prefix only partially matches the snippets' tab triggers.

Completions sourced from words in the buffer can be suppressed explicitly from an on_query_completions event hook.

Sublime Text provides two settings for users and package authors to tweak their auto completion behavior. Both settings work independently of each other and either of them can trigger the auto-completion popup.

Package authors may be interested in configuring triggers and/or the selector in a syntax-specific settings file.